Noomi blogs: ”Rescue of the Danish Jews to Sweden”

While the story of how the Danish Jews were rescued to Sweden from deportation by the Nazi’s, exactly 70 years ago, is a happy story, it also makes one a little sad. This is the story:

Denmark was the only country occupied by Nazi Germany during World War II that actively resisted the regime’s attempts to deport its Jewish citizens. On September 28, 1943, Georg Ferdinand Duckwitz, a German diplomat, secretly informed the Danish resistance that the Nazis were planning to deport the Danish Jews. The Danes responded quickly, organizing a nationwide effort to smuggle the Jews by sea to neutral Sweden across the sound.

Warned of the German plans, Jews began to leave Copenhagen, where most of the 8,000 Jews in Denmark lived, and other cities, by train, car, and on foot. With the help of the Danish people, they found hiding places in homes, hospitals, and churches. Within a two-week period fishermen helped ferry 7,220 Danish and 680 non-Jewish family members to safety across the narrow body of water separating Denmark from Sweden.

The clandestine rescue of Danish Jews was undertaken at great personal risk. Albeit the short distance, not all of the boats made it to the other side. A few boats capsized and its passangers drowned. Some refugees where caught by the German coast-guards. The Danes involved in the daredevil operation did this, knowing that if caught, they risked death penalty.

The Danish rescue effort was unique because it was nationwide. It was not completely successful, however. Almost 500 Danish Jews, mostly the elderly who were unable to quickly leave their homes, were deported to the Theresienstadt (Terezin) camp in Czechoslovakia. Yet even of these Jews, all but 51 survived the Holocaust, largely because Danish officials pressured the Germans with their concerns for the well-being of those who had been deported. (From the Jewish Virtual Library)

On the other side of the water were the Swedes. The refugees were received with open arms on the Swedish side. The Swedish leadership as well as laypeople and local Jews did their best to help the new arrivals find accomodations and work. They were alloted resources and made to feel welcome. More than 7000 Danish Jews, the vast majority of the Danish Jewish population, stayed in Sweden until the end of the war. Even the c. 400 Jews who were caught by the Germans and deported to the Tereseinstadt concentration-camp fared better than other inmates. Unlike others, they were allowed to receive packages of food and clothes from Denmark and the Danish government made it their business to inquire with the German authorities how their compatriots were doing. The assumption is that the Germans treated the Danish inmates differently, because there was someone in power somewhere who cared about them.

And that is why the story makes me sad. Maybe, and this is pure speculation, if there had been other countries like Denmark that counted their Jewish citizens as any other citizen, many more Jews could have been saved. Or even, if Hitler’s anti-semitism had not blended in so well with the fertile soil of anti-semitism in Europe, the Holocaust would not have been such a successful project. When we watch movies of Hitler today, there is something ludicrous about him. If the continent had taken a look at the Fuerer and said: “Hey, you have some shit on your upper lip”, we would be living in a different world. 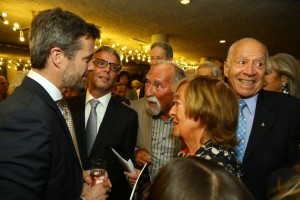 “My parents hob-nobbing at the Gala Concert in Jerusalem”

My parents, some friends and us shared Friday night dinner this week with a group of high-school kids from Gothenburg, Sweden. These young people belong to the Swedish Church, and they came to Israel on a one week study-tour. From the conversations around him, my father got the impression that the group did not know about this dramatic rescue operation. My father, on the other hand, knows a lot, not only because he is a well-read man, but also because he was there. My grandfather was the rabbi in Malmö, the entry city on the Swedish side, at the time. And my father, who was 14, got to see the new refugees first hand. He was already used to being surrounded by refugees. The family spent the war trying to get people out of Germany. I’ve met so many people over the years who say that they stayed with my grandparents during the war. It must have been quite a zoo, although everything pales in comparison with what the continent went through.  In any case, last week my parents went to a gala concert commemorating 70 years since the rescue. Under the impression of that evening, and of how rather oblivious some of the members of the Gothenburg group seemed about history, he got up and said a few words.  He said nothing about himself, and how hard it must have been for him and his sisters during those years. “Just so you know”, my dad finished his mini-history lesson, “here is something that Sweden did that you should know about, and be proud of”. Go Dad!