Once upon a time I studied history at the Hebrew University in Jeruslem. Studying history in Israel has the enormous advantage of allowing you to goand actually see archeological remenants of what you are studying. Anywhere you throw a stone in this densly populated country you’ll find many more stones, some of great significance and some just your garden variety. So, before you throw your stone, make sure that you don’t happen to have some invaluable piece of history in your hand. Not that we live in glass houses, but actually, it’s probably better not to throw stones at all. We have enough people throwing rocks, as it is.

A few weeks back, just returned from summer vacation, I wrote about some of the things we did on our trip in northern Israel. Among other sites, we made a much too short stop at the ancient port city of Acre, or as we call it, Akko. The city of Akko is so old, that nobody knows quite how old it is. Some documents indicate that it already existed as a port in the 16th century BC. That is a really long time ago. Befittingly, Acre is now listed on UNESCO’s list of World Heritage Sites, because this small town has often hosted the great players of world history.

Recently, in March of 1799, Napoleon Bonaparte was 29 years old. As part of his grande plan for defeating the hated British Empire, Napoleon had a sub-plan to conquer the Near East, overthrowing the powerful Ottoman Turks, and cutting England off from its colonies, particularly India. That included getting a foothold in the Damascus Region (part of the Ottoman Empire, including Syria and parts of present day Israel) and thus Bonaparte and his army made an attempt to conquer Acre. After two months opposite the thick walls of the fortress of Acre, the young general was defeated by the Turks, Sir Sidney Smith and his British forces. 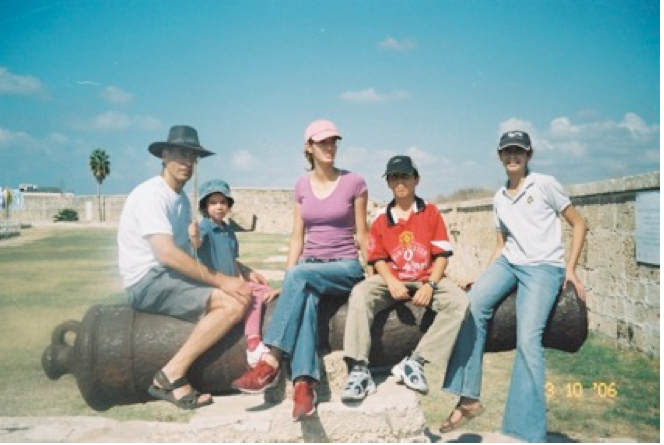 Picture above: Ancient history, husband and children on the Acre fortress wall, sitting on a canon captured from Napoleons forces (2006). It’s historical, because I took the picture and you can see who is in it

So that, in Acre terms, was recent history. In between antiquity aand now, Acre was ruled by King Solomon, Alexander the Great, the Byzantine army of Heraclius, the Muslim army of Khalid ibn al-Walid and subsequent Muslim Caliphates, the Crusaders, the Ottomans, the Brits and now Israel. From the Crusaders on, there are lots of archeological and architectural remnants to be seen and experienced. Acro was an important and strategic port city and the harbour is still delightful. The current city of Acro has a mixed Jewish and Arab population. Of its 46,000 inhabitants, about one third is Arab. For a long time, Acre used to be a place you visit and then sigh that it’s a shame nobody develops its potential. It seems that the municipality in the last decade finally has realized what a gem they are sitting on, and they are now doing all the right things to develop the city and attract tourists. There are splendid historical and religious sights, Templar tunnels, Crusader halls, the harbour, the Jezzer Pasha Mosque, the Citadel, the Bahai Holy Sites, The Hamam (Turkish Bath), The British Prison, the shuk (market). Slowly but surely, there are more restaurants, hotels, B & B’s, beaches and other attractions.

In Israel, it is my personal belief that it is useless to say, this is mine, because I was here first. Every claim is met by a counter-claim, you cannot prove ownership with texts or theology, regardless how valid they are in your own eyes. Ater all, my holy text is another persons’ myth. Acre is a prime example of that. Almost any historical building is built on the foundations of a previous building. The city has changed hands so many times that it is impossible to claim it for any one period, culture, religion or ideology. Everybody has part in the destruction and rebuilding of this tiny dot on the globe. At the moment, a great wave of reconstruction is sweeping over the coastal city. It brings prosperity to everybody, and honours the legacy of past inhabitants. What goes in Acre, could and should be true for the whole country. Only the volontarily blind can say, this is mine alone. Acro is fascinating, because it is so astoundingly rich in history. Don’t get me wrong, I’m not giving up on my beliefs that Jews have rights in this country. My religion tells the story of my stones, my foundations and my historical and spiritual connection to the land. It’s there for all to see, unless you willingly photoshop us out. But I can’t ignore that others are looking at other structures, other layers of the same structures, and experiencing their connection. Guys, we need to share. I’m willing to accept that there are others who were here too, who have loved and built and destroyed parts of the structure. To me, accepting that does not in any way diminish my own beliefs. Anyone trying to dislodge only his stones from this structure is going to cause the whole thing to come down. That’s a shame, these are magnificent buildings.